Let me begin by saying that I don’t really know who Brad Fallon is. I know he is some guru and that’s about the extent of my knowledge. I believe he had something to do with Stompernet, which was some SEO course that many people enjoyed back in the day, but eventually ended in a disarray of lawsuits and slap-fighting. Supposedly it was a good newbie course to getting backlinks and stuff, but who knows with that SEO nonsense.

Anyway, I came across this landing page the other day. I think it was someone who had a question in the PPVPlaybook forums about the legitimacy of some product launch or tricks being used on the landing page.

So I clicked the link and found this: Welcome to the 8th Day

What. The. Fuck. Where to even begin?

Let’s start with the page title: “Welcome to the 8th Day” For those unfamiliar with the creation stories in the Bible, God basically created the earth, sun, stars, man and animal, and other shit in 6 days. On the 7th day he rested, most likely to watch football and drink beer. So what did God do on the 8th day after all of this hard work? He created fucking uQast motherfucker!

That’s right. Brad Fallon has gone off the deep end so bad he thinks God has created his new product launch. Look gurus, I know you’re all over-confident, over-selling, under-delivering, snake oil salesmen, and that’s OK, but let’s cut the shit. If a god did exist, he would certainly not be doing this kind of shit. I mean, if I were God, I’d be busy spending my time torturing all the pedder-asses that run the Catholic Church who like to molest boys. Isn’t vengeance and wrath much more worthwhile than a guru product launch?

Now let’s get into the real bullshit.

The first thing you’ll notice is the video since it autoplays. “You are one of the chosen ones!” Like God handing picking the chosen people during the impending apocalypse, Brad Fallon has chosen you to embark on this journey of the future. The future that will “change internet marketing forever.”

Yes, it must be big and exclusive since you can only get in with a randomly generated invite code that is in infinite supply. Let me just take a wild guess and say that uCast or youQast or whatever won’t change shit. No one will give a fuck. Absolutely no one.

What’s even more ridiculous is the fake cheering and applause in this video. Like a bad sitcom filled with laugh-track, this crock of shit video has an entire fake audience cheering on this clown. Look gurus, I’ve seen some really shitty videos in your marketing efforts, but this one takes the fucking cake. How much of an ego do you have to have to put fake cheering, fake applause, and even a fake stage & curtain into a product launch video? Someone who thinks they are God, that’s fucking who.

Could you imagine if Steve Wagenheim put this kind of frivolous bullshit into one of his videos? (Now you don’t have to)

Really, if you were God, you’d have the omniscience to base a business around a domain name that made sense. You’d secure uCast.com (parked) youCast.com (registered) and others, or not fuck around spelling words incorrectly in the first place. Actually God would just be like “fuck this, I’m taking over u.com and that’s that.”

Dinosaurs and Abe Lincoln Go to Space – Can You Solve the Mystery?

Up until this point, everything is forgivable (now I’m just being nice.) The thing that inspired me to write this post is the background. What the fuck is going on here?

I believe Brad Fallon is secretly trying to tell us something through clues, like The DaDouchbag Code. I’m going to analyze some of this of this puzzle to see if I can put the pieces together. 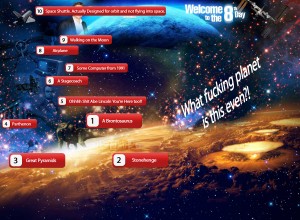 So what does it all mean? I have laid out the clues for you. I would come up with my own hypothesis but I cannot find a dealer who has acid. There’s no way I could even begin here without being heavily ripped out of my mind.

Let’s get Glenn Beck on his ass and connect the dots in meaningless and arbitrary ways. Greece has experienced rioting recently and now Egypt is on the verge of collapse. Do they have anything to do with each other (besides corporate America’s influence on their currencies and governments?) or are we just being led down a path to nowhere? What do dinosaurs have to do with Apple II computers? What about Stonehenge’s connection to Abe Lincoln? I can feel the insanity kicking in already.

Most important of all – What the fuck does any of this have to do with anything?!