The copy-paste mantra has becoming incredibly prevalent in affiliate marketing. So what’s wrong with ganking someone’s ads and landing pages? Well, for one, it hurts a real marketers feelings. For two, it’s not a long-term strategy for teh success.

But first, a fancy chart. As far as I know, this is the first post to involve a chart of any kind, so tell your friends “yo there be like charts and graphs and shit on PPC dot beezee.” 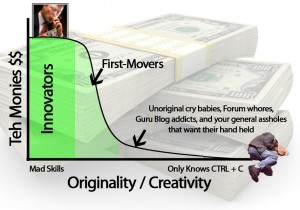 Don’t get me wrong – all marketers steal. For as long as there has been advertising, ideas have been “borrowed.” The difference between real marketers and straight-up fucking bums is the ability to take an idea and make it their own, or to spin it into something completely different. This does not mean just once – it means over time if you are making marketing your career (affiliate or otherwise.)

Copy pasting may work in the short-run, but it does not make you a better marketer, let alone a better human being you thieving fuck. If you aren’t sharpening your marketing skill set, well, you’re going to end up bringing a dull butter knife to a gun fight.

These are the folks that are responsible for the campaigns, ads, copy, and landing pages everyone else steals. They hustle hard and come up with ideas that most dare not think about, but once they are in the wild they do their best to defend their ideas from the vultures of affiliate marketing. If you are an innovator, you have a far better chance of defending your property (website, campaign or anything else) over someone who is stealing from others. Why? Because you have the data that no one else does when you were first to the party.

Innovators find the shit that works because they have gone through so many ideas – many of which do not work. No one bats a 1.000. We all have big plans that end up being total flukes, but in the long-run an innovative marketer will have more successful campaigns over a copy-paster.

And it is at this point, I will bash into your head the importance of testing. Tracking everything, and consistent split-testing is where you learn the most. Assholes guess, marketers test.

Now, there are definitely people that make money copy-pasting. But when everyone copies an idea or campaign – then it is not going to work.

This is the grey area between an original marketer and a bum. You see a lander, campaign, website idea, whatever and you decide you are going to use for your own financial gain. An innovator will take the idea, test new ideas against it, and find something that works better. Unoriginal clowns will copy the campaign or lander or whatever, and do nothing else but sit on their ass.

Those that borrow and make better become innovators. They learn from their mistakes and experiences, and learn what works and what does not from those that they borrow from.

A great example is the Coach series (PPC, CPV, etc… i wrote about it before). He was one of the first to bite Gauher’s shit – so he was successful in getting subscribers. But he didn’t separate himself with something new, so his status dived down into the Unoriginal, where PPC.bz proceeded to blast it to shreds.

Another example is the flog lander. When this shit was “outed” on an unnamed marketing forum, it worked for weeks and months just copy-pasting (being one of the first to know). But as more and more people jumped in, the margins slimmed and the competition rose – leaving a lot more people with a lot less profit. Fast money, even faster lawsuits and government involvement. If shit goes Oprah’s way, she’ll snatch that money right the fuck back.

Here’s why copying something 100% without your own thinking does not work (in the majority of cases.) You are copying something that is a snap shot of an innovative marketers campaign. You have no idea if it is working at the time, but you toss it up hoping for the best anyway. You are taking one ad from an innovative marketer’s dozens of ads. You are stealing the one lander in an innovative marketer’s rotation of 6 landers that isn’t working. And if you don’t know shit about testing (what marketing really is), then you’re going to end up all sorts of fucked as you lose money. Then you go cry on wickedfire and everyone laughs at you.

This is not just for copy-pasting either. It’s true for the assholes that wait around thinking they will learn something from blogs and forums. If someone drops something that is easy and requires little brain work, expect every other tard to jump on it too. Have fun. These kind of ideas don’t come along very often either.

True innovation requires hard work (consistent testing) and during the process you learn what marketing really is. Taking the easy route requires no work, but gets you nowhere mentally and financially. There are plenty of great starting points on blogs and forums. A bum will take ideas and go no where. An innovator will see an idea for what it truly is, and add their own spin based on their experience.