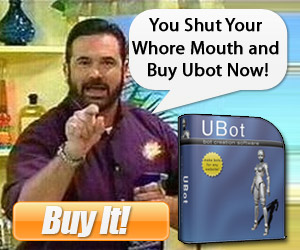 A few weeks ago I was linked to a website for this program called Ubot. I looked at the page and did not understand what this shit did. Then there was a thread on Wickedfire, and the testimonials were gassing this product up. I bookmarked the page so I could check it out later, as my curiosity was piqued.

But today I got myself a review copy plz of Ubot. I don’t know why people give me free shit, but I guess it’s because I run a popular blog. I spent today just doing the Keyword Research tutorial to get the hang of it, and the following post is my review of Ubot.

Anyways, my background when it comes to programming is that I cannot, in fact, program. I can hack shit together but it takes me all day. I understand PHP and HTML but once you get into OOP and Classes and all that shit i get lost. If you put me on a scale of 1 to 10, I’d be about a 4. (Yet a 10 in the looks department)

What the Fuck is Ubot?

First things first. Out of the box, Ubot doesn’t do anything. If you are expecting some digital ATM machine then you are wrong (and you should hit yourself for ever falling for that guru buzzword).

Ubot is basically a tool to make tools.

“I’m an idiot barman. What does that mean?”

Shut up and listen. Imagine you have some tool to bookmark your latest blog post at some social bookmarking websites. You have this tool because it’s easier to automate the process then doing it site-by-site. Or your can hire your Indian brothers to do it for you. Either way, these kinds of tools or services already exist, and some examples would be Autopligg and SENuke, or the BST Section of Wickedfire.

And now Ubot comes along, which is basically a program that will let you build anything as long as it interacts with a website. So now you have the ability to create a programs that already exist but cost hundreds of dollars.

There is a learning curve with Ubot, no doubt about it. But this is one of the best thing about it – retards need not apply. If you are some beggar always looking for the easy solution, it’s time for your to GTFO.

When you build a script with Ubot, you are basically creating something step-by-step: Open website. Select field. Enter data in field. Push enter. Process next page. Do this if that, do other if something else. Scrape, Export, etc.

This isn’t any different from programming something with PHP and CURL, but it makes the process a whole lot easier if you are a shitty programmer like me. You need a basic grasp of HTML and how websites work to make Ubot worthwhile.

Another part of the learning curve is you actually need something to automate. If you don’t have a fucking clue on how to build links with social bookmarking, submit ads to Facebook, spam gay black male dating sites, whatever the fuck makes you money, then you can’t really automate nothing, right?

Ubot is a Quality Tool for Innovators

If you come up with ideas all of the time (like I do when I’m baked on some fine chronic) but can’t program them for shit, then Ubot will probably change your life. Obviously, you can outsource anything, but finding reliable outsourcing is a pain in the balls, and racks up the expenses. ENGLISH MOTHERFUCKER, DO YOU SPEAK IT?

And if you’re paranoid about your outsourcers stealing your script or selling it elsewhere, you need not worry any more.

The limitations of Ubot are in your head. If you have any imagination whatsoever, there is a 99% chance you can build a tool no one else has with Ubot.

The main problem I originally had with Ubot was “What the fuck does it do?” There is only one tutorial, but if you get through it the skills you pick up are all you really need to know (Adwords Keyword Scraper). Once you have the hang of it, then you can build a shit-ton of scripts.

The problem with buying software that already exists is that you cannot customize it. Maybe you wanted just one feature that wasn’t in the software you bought. Aside from bitching at the creator, you have to wait for the updates you want to be released (if they ever are). With Ubot, you can add and remove whatever you want, whenever you want.

But like I said there are a lack of scripts on the site. So here are some ideas that you can build with Ubot right now.

You can pretty much take ideas from any script or software you have ever used, and customize it for your own needs.

The only thing I do not like is the ability for Ubot to compile your script into a stand-alone executable. I guess they added this if you wanted to sell your own software that did something. This is the only benefit I see.

Otherwise, this feature will ruin a lot of peoples days. You know some asshole is going to come up with, and freely release, a script that someone else has been banking with for months. You know, those assholes that don’t know how to make money online but sure as hell like ruining it for everybody else.

For example, you’re spamming some social website. Then some asshole comes along with the same spammer and releases it to Wickedfire. Now a couple hundred idiots are doing the same exact thing and your technique is squashed. Kapoot. Outed. Done. Dead.

There is always some asshole out there to ruin it for everybody else. I guarantee it will happen multiple times if this feature isn’t squashed (or at least limited to sharing EXE’s with other Ubot users.)

The Final Verdict on Ubot

This is legitimately the best tool ever released. If you are an fast, experienced programmer then you are probably pissed. If you are someone limited by programming ability, then your life will change.

You can take Ubot and build anything your little heart desires. If you use a tool that you always thought you could make better, now you can. You can buy one license of Ubot for $245 and in the long run it will be cheaper than paying for other peoples’ tools (especially if they are monthly subscriptions.)

I’ve only scratched the surface. I haven’t gotten high yet so I haven’t come up with any brilliant ideas to use Ubot for.

If you do not buy Ubot now you are a stupid, cheap piece of shit.

That is all. Expect some more Ubot posts in the future. Some tutorials and examples, maybe, to help you understand the program as I learn it.